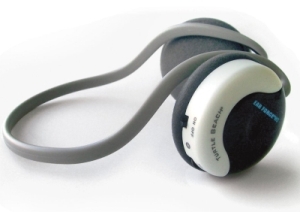 It’s been quite a while since we report on anything from Turtle Beach. This is a real shame, because the company is putting out a lot of gaming headphones that really helps gamers shut out the rest of the world.

Now, you may think shutting out the rest of the world isn’t healthy, but you should try living in it once in a while. Seriously, the Ear Force series is an excellent collection of padded earphones for gamers, and I had a chance to try many of their models out in person when I was at the Penny Arcade Expo last weekend. (Yeah, I have been mentioning that a lot lately.)

The W3 is designed for the Wii. At least, it seems to be the only one from Turtle Beach that works well with the Wii. It also works with the Xbox 360, Playstation 3, and PS2. The W3 has a behind the neck design and is ergonomically designed to stay on.

The W3 has a splitter cable so the audio stays connected, and works with a battery. It also has an AC-powered transmitter connects to the audio output. So yeah, it is wireless.

In short, the Turtle Beach W3 is designed to be a set of wireless headphones for the Wii, or any other video game system. They have a very low price of just $24.95 and is available at the Turtle Beach site.