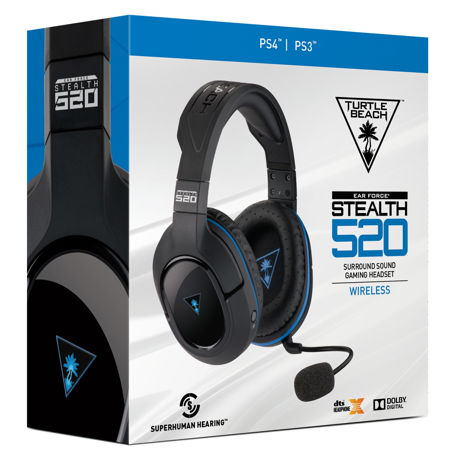 Turtle Beach and gaming headsets have always gone hand in hand, and it does not seem as though this particular tradition is going to end up extinct anytime soon. In fact, we have received word that console lovers — in particular PS4 and Xbox One owners, will be on the receiving end of the Turtle Beach Stealth 520 and Stealth 420X+ wireless gaming headsets.

These might seem to be rather familiar in design, and that is because they are the respective sequels to the best-selling Stealth 500P and Stealth 420X models. The Stealth 520 and Stealth 420X+ will retail for $129.95 and $149.95, respectively, where they should have gone on sale from today onward, bringing gamers exactly what they need to hear everything — as well as a competitive edge by defeating everyone via Turtle Beach’s exclusive Superhuman Hearing sound setting.

The Turtle Beach STEALTH 520 gaming headset is 100% wireless for the PS4 and PS3 consoles, where it comes with DTS Headphone:X 7.1 Surround Sound, Superhuman Hearing, and a wide range of additional features that all gamers should be able to appreciate. Boasting of full-range 50mm Neodymium speakers as well, one can enjoy amazing 3D 360-degree soundscapes with unmatched spatial accuracy. Other features include Dynamic Chat Boost, Mic Monitoring and Adaptive Mic Performance, independent game and chat audio controls, a 15-hour rechargeable battery and mobile compatibility.

As for the Xbox One-bound Stealth 420X+, this gaming headset will be chock-full of features as well, boasting of Superhuman Hearing that provides a competitive advantage by allowing players to hear soft sounds like enemy footsteps sneaking-up from behind and weapon reloads off in the distance, Bass Boost and other audio presets, Mic Monitoring for players to hear their own voice, a 15-hour rechargeable battery and mobile compatibility. Looks like it is time to bring your gaming to a whole new level with these two headsets!