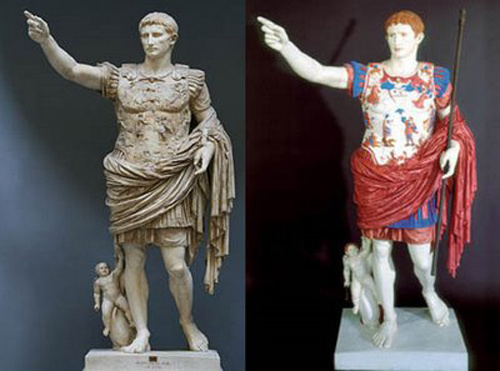 Every once in a while, science proves that our ideas that we have about ancient cultures are wrong.

After all, every film that I have seen about Ancient Rome, whether it be Gladiator or Ben-Hur, shows that the civilization was filled with white buildings and statues that were devoid of color.

Sure, it shows how dictatorial and powerful the Romans were, but in reality, all those buildings and statues were painted up in bright colors. All of those centuries of wind, sun, and sand strip the colors away like bleach.

All you need to do is shine an ultraviolet light on it, and, as long as the path of the light is almost parallel to the surface of the object, it makes the brushstrokes obvious. As different paints wear off at different rates, the raised levels of stone reveal the elaborate patterns of paint that was once on the seemingly untouched white surface.

Well, this certainly affects my perception of Greek and Roman history. Now, instead of thinking that their taste in art was monochromatic and bland, I realize that they have the pastel aesthetic of the 80’s decade.

Maybe we should turn that ultraviolet light on Michelangelo’s David. I wonder what colors we would see there.