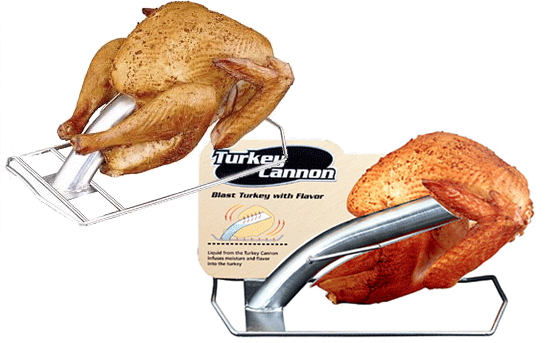 It looks like a medieval torture device, but the Turkey Cannon will actually cut down on cooking time by heating from the inside as well as outside. Made out of stainless steel, the Turkey Cannon is based on the old recipe called “beer can chicken” which steams the inside of the bird while the oven cooks the outside to a crispy golden brown.

The design is fairly simple. The stainless steel tub jetting out from the base can be filled up with broth, juice, beer, or any other flavorful liquid which willl then turn to steam as it is heated. The turkey, or chicken fits over the pipe and elevates the bird above the pan so that convection heat can encircle the bird, making cooking time even shorter.

You can still use a beer can for your chicken, but come Thanksgiving time, you may really wish you had the Turkey Cannon.

Cost is just under $30 from Chef’s Resource