Here’s contest entry #6, a very indepth review of the Trust Silverline 751b Surround headphones, thanks Andy. 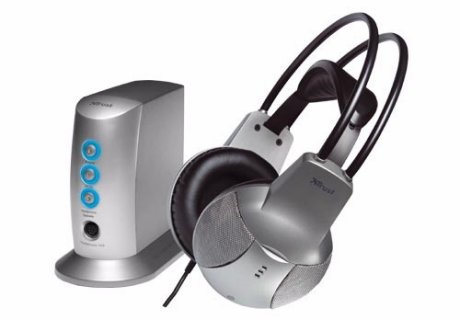 This isn’t that much of a review of a cool gadget, nor does it describe a novel device or something that hasn’t been reviewed before. It’s more of an awareness riser, which at some point might even seem to be an advertisement, as the product is incredible.

A few months ago I went out, looking for a 5.1 headset. I entered a shop and had two choices: the Trust ones and some USB phones from TEAC. I have used USB 5.1 headsets before, and was pretty disappointed: always that wait time when plugging in, a big CPU hog, always had to change application settings to use the new audio device… far too much hassle for my lazy self.

At first I couldn’t decide, because I didn’t know the manufacturer and it sounded like just another cheap Chinese craplastic product. But then, the price, the fact it wasn’t another crappy usb device and the design convinced me, so I paid the 35 euros and went home.

What I found in the box: 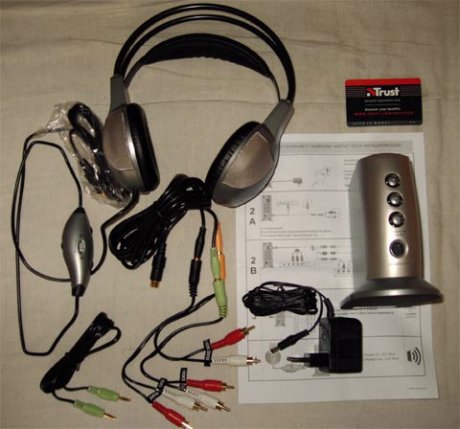 Every single connector is gold-plated (nice, for 35 euro phones, huh?) 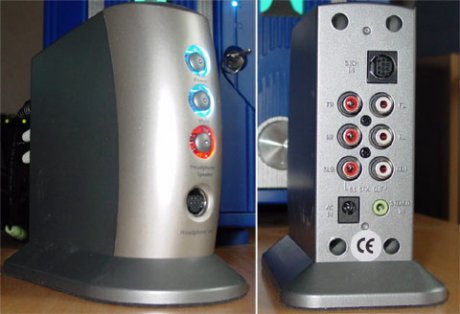 This switch is a great thing. It includes a preamp and allows you to have you phones and 5.1 speakers AND optionally another pair of stereo phones connected at the same time, and doesn’t add any noise at all. Not only does it have a good design and nice lights (the LEDs are very bright, but they don’t stab you in the eye – don’t distract or blend), but it’s pretty sturdy and heavy, and can be used as a kind of stand for the phones when they are not used.

On the front there are 3 buttons and a connector. One of the buttons is rather useless for people who own multimedia keyboards, as it’s far far easier to push a ‘Mute’ button on the keyboard than to stretch your arm and press a ‘mute’ button on the switch. The placement is smart then.. it’s in the middle, so you know that the one above it is for turning the device on and off and the lower one is for toggling between phone and speaker output. Below the switches there’s a connector (proprietary?) for the headphones. It all looks pretty good on the front panel, but the real pleasure comes when looking at its behind 😉 There you’ll find another such connector, used to link the switch to a device with 5.1 output. Below there are 6 RCA-mother connectors, for the speakers. This is where the 3 adapters included did come in handy for me, as I have a standard altec lansing 5.1 sound system, and the adapters were perfect for connecting it. Below there’s the AC (yes AC, there are amps inside, and the one used for the speakers makes such gorgeous vintage clicks when it’s turned on and off, plus when you turn the unit off the sound continues and fades out as the current is used up) input and a 3,5 mm stereo connector. This little connector has a dual functionality: when there’s no surround input, it acts as a stereo input, and when there is a 5.1 input it is used as an output for another pair of phones, albeit only stereo phones… 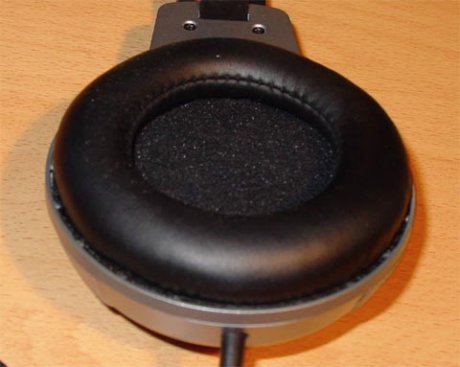 First of all, I’d like to brag a bit and tell you that I’m a guitar player and a (wannabe) audiophile. So, I got to use and try lots of headphones. The only headphones that had a far better build than these ones were made by AKG, and that’s a totally different price class. The design is not striking, it’s just decent and good. The material used is mainly plastic. The phones are auto-adjusting, and here I have another mention to make: THEY STAY ON WHEN MODERATELY HEADBANGING!.. I’ve never EVER seen other headphones that are comfortable and sit good at the same time… and these are auto-adjusting too.. bravos Trust! The leather and foam used on the loop and shells are perfect. You could easily forget you are wearing phones if they didn’t warm up your ears.

I won’t complain because of the lack of ventilation, because it’s compensated by an admirable efficiency at completely insulating you from the world outside and letting you immerse in the movie/music/game. Another important note: I have big ears! (and yes, they are still very comfortable). The overall workmanship is great. I didn’t take the leather ring and the foam layer down, but I found this picture (with english markings!) on the German www.hardwareecke.de site which shows what’s below. I’d rather regard it as a black box than break it  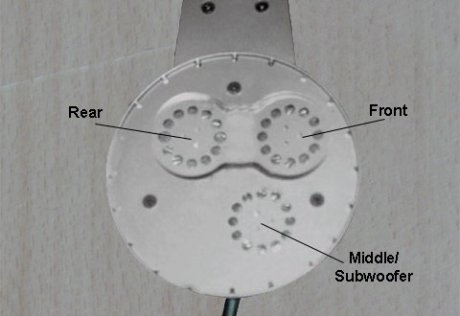 As you can see, the speakers aren’t big or fancy or anything else. No effort placed into the inner looks, but a lot of engineering to make it sound well. But I’ll talk about the sound later.. just read on!..

Okay, now for a bad (but still not really bad) point: 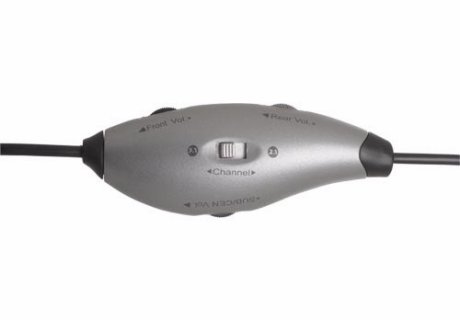 This is the worst part of this whole kit: it’s ugly, looks fragile and carelessly built. It’s placed at the optimum distance (for me at least) from the headphones, and has 3 pots and a switch on it. Though ugly, the design allows for easy and intuitive access to the pots, so you’ll only have to look at it the first 4-5 uses (good thing, because it really is UGLY). The workmanship doesn’t seem to be that good with it.. the switch on mine doesn’t look centered at all (and so do the pots), the material is true craplastic and the two halves of the shell don’t join perfectly… BUT it was able to withstand lots of bangin’ and crashing (and by the way, so did the phones) and there was no damage. Also, the remote often comes in contact with pens (yes, chest pocket geek pens), zippers etc, and it isn’t scratched or anything (have had the phones for 5 months now). The pots work perfectly even if they look like they’ll break the next second, and the 5.1/2.1 switch works too, though it looks like crap, all queer in its slot.

There it comes… the most important part… The SOUND!

I’ve used these headphones a lot in the last few months.. They made me give my altec speakers up.. now I only use them when walking around the room/house or when I have friends over. If you enjoy movies for what they are and not as a social experience, you will lock yourself in the house with a truckload of DVD’s and watch and LISTEN to movies to death. There’s so much detail in what you hear.. no cinema experience can even come close. It changed the way I immagine music when I listen to it. You’re no longer in front of the band, you’re IN the band, The sound is all around you, in the beginning it’s an eerie sensation. After using stereo phones and monitors the entire life, you suddenly feel like you’re on stage and everyone’s monitors are directed at you. Many of my friends didn’t like the way stereo music sounded through these phones in the beginning, but all of those who were patient enough to wait and listen carefully fell in love with the sound. I got two DTS-remastered Queen CD’s for my last birthday, and again these headphones made me listen to them perpetually… there’s so much detail, so much precision both in response and topography…

The fidelity is also amazing. I changed my soundcard because of these headphones. I strongly advise against Creative’s crappy consumer soundcards. The only good soundcard they made was the original SoundBlaster 5.1 digital. And that one was good only at its time. Only 2 or 3 soundcards from Creative are better, and they cost far too much. I strongly recommend M-Audio Revolution soundcards –or, if you don’t want surround but just excellent sound quality both for listening and recording, try their Audiophile series.

So, as a conclusion, it’s great for movies and music. It changes the way you enjoy movies (and I watched quite enough of them on my sound system and some pretty high-end home theaters but no speaker can match the detail played back by headphones). It transforms even the puny 128kbps mp3’s you have on your computer, it truly takes you away if you have 5.1-mastered discs.

But, let’s not forget gaming J. I’m not an avid gamer, I don’t have a lot of spare time so I can play, but I enjoy the occasional match of Warcraft, and a good shooter or RPG every now and then. I really loved it in Thief3, Oblivion and Warcraft (not much surround there tho’). In Thief and Oblivion you can actually pinpoint the distance of the sound source, not only the direction it comes from. This, of course, happens after a (not that long) period of accomodation. For review-specific purposes I installed FEAR, NFS carbon, ToCA3 and Quake4. The sound is just amazing… you really FEEL various items whizzing past you in car simulators, also thanks to the big bass, and in quake you really can get spooked (as you can in Thief). It’s amazing… Couldn’t even compared it to the speakers… you lose too much detail when you don’t use a very high volume with speakers, and that sucks. FEAR would deserve its own column. These phones let the game unleash its full potential. The action is deeply carnal, immersive and impressing. I’m quite wordless, and must admit I had goosebumps at one point.

And here it is, THE CONCLUSION

A M A Z I N G ! ! ! Go out now and grab one of those if you can find them (or google for them and buy online). They’re easily one of the best headsets I ever tried, the best I ever had, and probably the best value phones EVER. It’d really be a shame to save $40 or how much they cost instead of quickly grabbing a pair. It totally changed my view on this particular company, and I’ll be more open-minded when testing and buying from now on. I’ve seen far more expensive devices that don’t live up to this. (those two brands sooo popular at LANpartys.. I won’t give names… they totally SUCK compared to this) I’ve had Sennheisers, Technics and Sonys that didn’t live up to this. If you have an expensive soundcard it’s MANDATORY to get a pair of these, and only then you’ll see how good your card actually is J

Credits: picture credits go to hardwareecke.de and trust.com (Andy was too lazy to untie my cable salad and my place is too messy for pix, pah, great job with the review though).