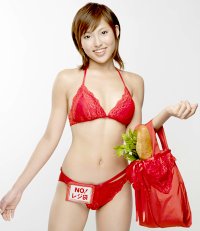 Japan is one of the most environmentally-conscious nations in the world, and it is no wonder that they will find all sorts of ways to keep the earth clean. It is amazing to see such well kept and clean cities all over the Land of the Rising Sun despite boasting a metropolitan population. With the latest version of the Containers and Packaging Recycling Law specifically stating the reduction of plastic bag consumption as one of the key objectives, world famous lingerie maker Truimph International Japan has lifted the curtain on a brand new brassiere that doubles up as a shopping bag.

This bra is better known as the “No! Shopping Bag Bra” and is hoped to vastly reduced the use of plastic bags by shoppers in Japan, carrying their melons and other groceries in their converted underwear instead. It takes just a short while to put together the bra into the form of a shopping bag. One thing still bugs me though – are the women going to go around bra-less while they do their shopping, or do they carry a spare just in case the load gets too heavy? Surely there must be changing rooms in every wet market now as you don’t expect them to expose themselves while assembling the “shopping bag”.

You can pick up this unique piece of underwear in red, blue, green, yellow, and pink colors. It is made from the Teijin Group’s ECOPET brand of polyester fiber, which has been duly recycled from plastic bottles courtesy of the company’s patented EcoCircle recycling system. This is not the first eco-themed bra from Truimph International, as their other wacky offerings include the Recycle PET Bra back in 1997, the Eco-globe Bra two years ago, and the Warm Biz Bra that debuted just last year.