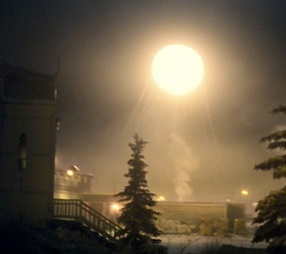 Ever seen the movie Insomnia? In the film, Al Pacino investigates a murder in an Alaskan town, but there is never any night. As it so happens, he arrived during the time where there are six months of daylight.

I always wondered if the film would have been scarier had it taken place during the six months of night. I think Christopher Nolan, the director of the film, had to make the dark Batman Begins to make up for the daylight of Insomnia. I hope I never have to live in a night that last six months.

I bring this up because a town of Inuvik was in that perpetual night, until Tropicana came to town. The orange juice company hooked up a gigantic helium balloon with about 100,000 lumens to make an artificial sun. You can see the video after the jump.

And then they passed out orange juice and filmed a commercial. Granted, it is rather a lame excuse to pitch your product to Inuvik, but a good excuse to see if you can really make an artificial sun to brighten a town that was shrouded in darkness.

At least the Tropicana sun is much more constructive than Icarus, the artificial sun/big fricking laser in Die Another Day.