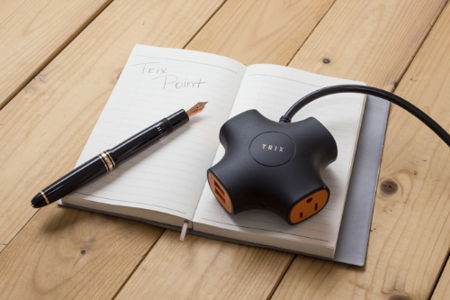 Form over function might be the old mantra that has kept the world moving along just fine, but for those who would prefer to enjoy the finer things in life, one might find it more useful and suitable to come up with an idea that not only works, but it looks great on the eyes, too, as though it was some sort of poetry in motion. Having said that, most of us are pretty numb with the design of a power strip, where most of them look the same, but from time to time there are surprises like what Eubiq delivered. Well, Eubiq is an old idea – relatively speaking, being a decade in age already, and here is a different take that might just pique your interest (and then some) – the TRIX power strip.

This spring, you might want to seriously consider changing the way in which you look at power strips, as the TRIX power strip is touted to be the smallest and most elegant ever released, thanks to the designers over at TRIX Point Corp. The whole idea of the TRIX power point is to share three purposes: “Live better, share easier, travel further.”

This power point known as TRIX will offer one with an organized workspace, all the while not looking like an eyesore and standing out like a sore thumb, as it aesthetically unifies with other appliances around the home. It has also been specially designed for portability and versatility, and happens to be one of the best desktop companions that one might be able to pick up.

It has a trio of AC outlets as well as a pair of USB ports (2.1A combined) that will further make life all the more convenient, taking into consideration how a fair number of devices these days tend to get charged up with nothing more than a USB port. This means the TRIX is more than capable of transforming a solitary outlet into a power source for multiple electronics – simultaneously. It does not matter if you are waiting at the airport, or hanging out in a hotel room, or even presenting a slide show, the TRIX is a must have device as you are travelling.