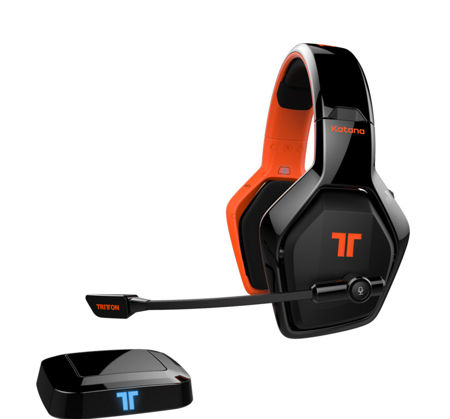 While having beautiful graphics in a game is a great pull factor for gamers, the right kind of audio quality to keep the game company is equally important – otherwise, there is no need for movies to move on from the silent era, don’t you think so? While speakers do a really good job in delivering the right kind of aural ambiance whenever you watch a movie or play a game, those who are involved in more competitive gaming might want to check out a pair of decent headphones to help you figure out the tiny nuances that might mean the difference between victory or defeat. Mad Catz has come up with its gaming headsets in the past, and this time around it has announced the Tritton Katana HD 7.1 Wireless Gaming Headset.

The Katana HD from Mad Catz holds the distinction of being the first gaming headset in the world that draws its audio signal directly through HDMI so that it can deliver eight channels of beautifully uncompressed audio. Not only that, since it will be HDMI-powered, it should be able to play nice with just about every device – ranging from consoles to desktop computers, Blu-Ray DVD Players, and HD Set-Top Boxes, among others.

Best of all is, this is wireless – just in case you haven’t noticed.The HDMI base station will do the job of transmitting data to the headset, and chat either wireless via Bluetooth on the PS4 or wired to the gamepad with the Xbox One. As for the final killer blow, it would be DTS Headphone:X surround sound, a state-of-the art audio technology that faithfully recreates a spatially accurate 3D sound experience. We are talking about it delivering HDMI audio in the purest possible audio signal without any compression, which means there is no loss in quality. Any takers?