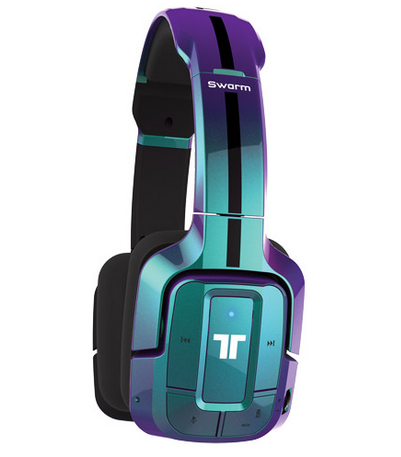 When you’re on the go, you want to listen to podcasts, music and watch videos with the same audio clarity that you have at home. However, it’s hard to take a full-on headset everywhere you go. They can be bulky, and weren’t made to fold down. If you don’t want to look like an air traffic controller, but still want the same kind of all-encompassing sound, then you are likely on the hunt for a headset that is worthy of your hard-earned cash.

While Mad Catz may have been a faulty choice years past, they have revamped themselves to be better than ever. We’ve seen some of what they’re capable of, and they haven’t stopped making more to tempt our wallets. The Tritton Swarm Wireless Mobile Headset might take the place of your new favorite headgear at home or on the move. This will work with your Android, iOS, smart devices, PC, Mac, and gaming consoles. This has the ability to detect what your device is capable of, and configuring your audio so you get the most from your listening experience.

The buttons are on the ear cup, and will let you skip or go back to previous tracks, play/pause music, mute, control the volume, and answer calls. You’ll even be able to sync to two devices so you can switch seamlessly. This does fold flat, so it can go wherever you do. You’ll be able to pre-order a pair for yourself in iridescent blue, red, pink, green, or straight up black. This will cost you $149.99, and will start shipping in March.

Available for pre-order on MadCatz