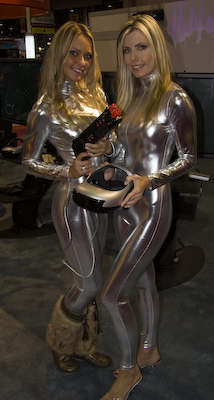 Virtual Reality has had a chequred history over the years. It’s a technology that has always amazed anybody who’s tried it but the component cost has always kept it out of the hands of most people.

Trimersion are trying to change that with the release of their wireless VR headet. Yes, I did say wireless! The problem with using a headset for first person shooters is that when you’re standing up, blowing away aliens on a virtual spaceship, you can get very disoriented and end up tripping over the cable. Plus the weight of it tugging on you is a constant reminder that you’re still in the real world.

Trimersion have solved this problem by sending the video to the headet via a wireless transmitter. And because we all like to shoot things every once in a while they made a controller shaped like a gun and attached it to the headset. End result? In theory, a scarily effective sense of immersion.

I say in theory because the CES show gremlins are out in force so although I can see the accuracy of the head tracker (by watching it manipulate the game on the TV) and try the headset on for ergonomics, I can’t actually see a picture inside it 🙁

Trimersion assure me that this is a show related problem and that they’ve never had any issues running inside people’s houses – time will tell whether that’s going to be a problem or not as the wireless spectrum gets increasingly crowded.

Ergonomically the headset is a good fit even with my glasses on – close fitting but comfortable – and the stereo headphones do a good job of isolating you from reality. The controller is styled like a sawn off shotgun so you can imagine how well it works (or would work if I could try it) on first person shooters. The controller has various buttons and d-pads to replicate the standard controls of your average console controller so plug the unit in and you’re good to go.

The Trimersion comes with connecting cables to plug into Xbox, PS2 and USB for the PC and it’ll be available in it’s wireless form later this year for $395.