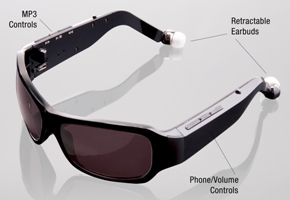 While I was at CES Unveiled, I managed to see a product that I probably would have missed on the showfloor called the Tri-Specs. Tri-Specs are Bluetooth wireless headphones for an MP3 Player or cellular phone that are in the form of sunglasses.

At the ends of the Tri-Specs are two retractable earbuds that the user can put in his or her ears, which automatically turn the Tri-Specs on when extended. The best part is that no one would ever know that you are wearing earbuds while you wear the Tri-Specs glasses. You could be listening to MP3s while you’re supposed to be listening to the human resources director talk about some needless thing. Unless they look closely, your supervisors would never know.

The phone and volume controls are located conveniently on one side of the frame, and the MP3 controls are on the other side. In addition to the manual controls, the Tri-Specs can also accept voice commands with the STEPvoice software that can recognize the user’s voice from others, as well as outside noises.

I was amazed at the design of the shades, because fashion was not sacrificed for functionality. In other words, the sunglasses look like actual sunglasses and not an MP3 Player pretending to be sunglasses.

The Tri-Specs should be available now for a price of $199.99, in colors of black, white, silver, blue, black metallic, as well as black and white combo.