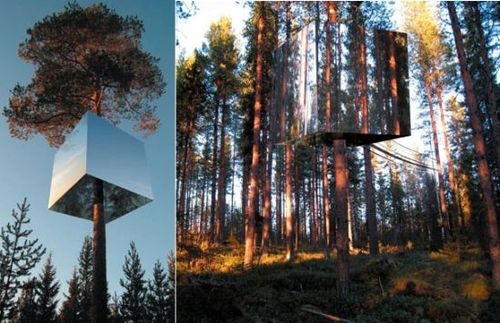 This is the Tree Hotel, designed by Swedish architects Tham and Videgard. As you can see, it is nearly invisible as it is a box made of mirrors.

It was once a concept that others mocked, saying it was “computer-generated eye candy, impossible to build, and death for birds”. There is apparently a special film that is visible to birds and applied to the glass.

As you might have guessed, it is a somewhat eco-friendly resort. It was constructed from sustainably harvested wood, has an electric radiant floor heating and a state-of-the-art incineration toilet.

The designers want to maintain the beauty of this untouched forest, and they are on record as saying:

“This is untouched forest, and we want to maintain it the same way. We decided, for example, to not offer snowmobile safari which is very common up here,” says Selberg. Instead, wilderness walks will be offered.

This is one of apparently six mirrored cubes that is planned to be built at this location, and it is located about 40 miles south of the Arctic Circle.

I certainly wouldn’t mind staying here, but I hope that it stays warm in the wintertime. Something tells me that the snow would make this mirrored cube very visible. I hope the architects took these factors into account. Let’s just say they did.