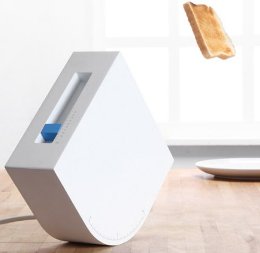 For those who aren’t familiar with a trebuchet, it is a medieval catapult that uses specially distributed weights in order to fling projectiles at distant targets. It appears that someone has taken that concept and applied it to toast.

As you can see from the photo, the toaster has a specially crafted edge that allows for creating an angle for when the toast inevitably pops out. Apparently, you can adjust the force of the pop so your toast can fly further, but it has nothing to do with specially distributed weights.

We have covered a lot of toasters here at Coolest Gadgets, but most of them aren’t really special, just some new theme, like the Darth Vader toaster. This is the only toaster that takes toast launching to a whole new level!

Yes, I’m not certain why you would want this. Perhaps you’re one of those people who always admired cartoon toasters with their ability to launch toast from across the room, and you just have to have one for yourself. The Trebuchet Toaster is your fantasy come to life. Wile E. Coyote would be proud.

If you want a more practical use of this item, maybe you can set it to a timer, so you can wake up to toast launched right in your face. I love the smell of toast smacking me in the face in the morning, smells like…victory.