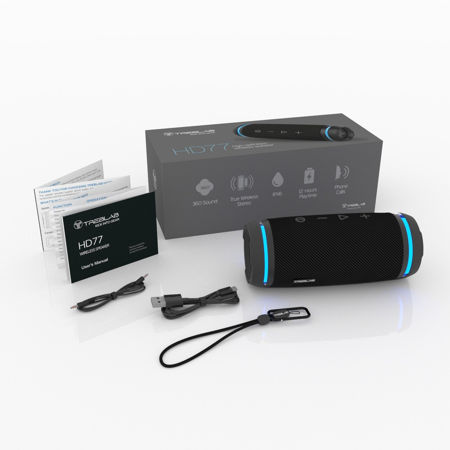 When it comes to portable speakers, there are many different models to choose from. After all, there are different speakers for different kinds of situations, but most outdoor speakers tend to take on a tougher persona than usual for an obvious reason: there is a higher chance of being exposed to the elements, hence a certain degree of water resistance and shock resistance. Treblab has come up with the Treblab HD77 portable speaker that is specially meant to be carried around with you when you indulge in outdoor sports activities, in line with the company’s sports oriented vision.

The Treblab HD77 is definitely stylish to begin with, where it is made out of high quality materials that are also durable. Sporting rubber ends, these will help absorb any kind of potential damage if it is dropped by accident, not to mention guard the inside components against accidental knocks. Never mind a fall, the speaker is well cushioned due to the unique design. In addition, the Treblab HD77 sports a stellar water resistance rate (IPX6) that will further protect the speaker from splashes, meaning you do not have to rush around like a headless chicken should it begin to rain, and neither do you have to be worried about bringing this to the waterfall for a picnic or by the beach when you hang out.

The Treblab HD77 offers powerful 25W stereo sound quality, delivering 360° clear sound regardless of the volume. DualBass technology will even allow it to handle the deepest grooves thrown at it. If you so desire, you can combine a couple of Treblab HD77 speakers into a single True Wireless Stereo system, letting you create a truly enchanting atmosphere. The Treblab HD77 will play nice with iOS, Android, and Windows operating systems, where the user-friendly interface will lets you pair the speaker with a smartphone or laptop quickly without any issues. Using Bluetooth connectivity, it offers a wide signal range of up to 33 feet, while the built-in mic is convenient for accepting calls.

With a 5,200 mAh battery working alongside the PlaXTend Battery energy-saving optimization technology, you can enjoy music for up to 12 hours straight. Expect the Treblab HD77 speaker to arrive with a microUSB charging cable, a 3.5mm AUX cable, a carabiner and a carrying strap.