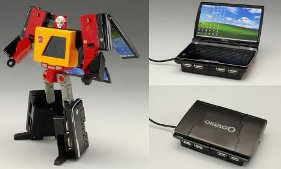 It must be the anticipation of the Transformers: The Revenge of the Fallen movie that keeps me covering these transforming PC accessories. The first was the Ravage USB thumb drive, and someone else covered the Trypticon laser mouse before I had the chance.

Of course, I couldn’t resist reviewing this netbook that transforms. Not only does he become a robot, but he turns into Blaster, the Autobot version of the Decepticon Soundwave. I realize that there is a whole generation that doesn’t know what I have referenced, but Blaster could originally turn into a radio.

Blaster could never turn into a working radio, and the Qosmio netbook that this transformer turns into does not function either. It does function as a 4-port USB hub. Yeah, I’m sure you could easily see that it is not a working netbook with the screen split on the back of this robot here.

That was always one of the quips about Transforms. They often split in places that they shouldn’t be able to in real life. I remember this one Transformer named Warpath who could change into a tank, and it would split at the tank treads. Of course, the tank treads were just one carved plastic mold on the toy, but reality wouldn’t allot for that.

The original source for this is translated from a Japanese site, but it is available for 3,980-5,775 yen.