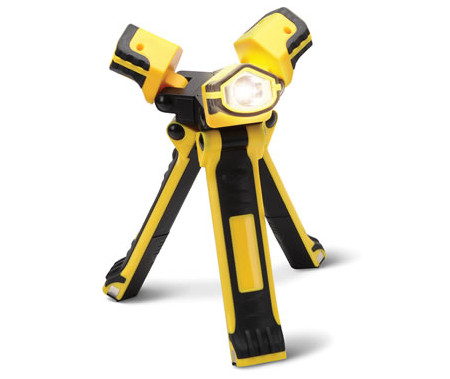 Surely you must, whether it is Michael Bay’s blockbusters on the silver screen that recycles shots in the same movie, or the cartoon of yore that had Megatron turn into, of all, things, a gun, there is something about sentient alien beings that arrive in the form of nuts and bolts (to strip them down to their most basic form factors, of course). Well, here is something that has nothing to do with the Transformers franchise at all, but it does look as though it is connected to Bumblebee, one of the characters in the franchise in particular – the $39.95 Transforming Flashlight.

The Transforming Flashlight happens to be a flashlight that cleverly transforms into a multitude of configurations so that it can suit a range of uses. Being a handheld flashlight, it has powerful LEDs that provide up to 90 lumens of glare-free light, and if one were to angle the three pivoting LED heads to 90° and spread the shaft, it will turn into a three-legged lantern that provides three cones of light. To make things all the more interesting, it will be able to convert into a trio of separate flashlights, where each will feature a flat, slimline shape that enables one to see into tight spaces, and when set down, will not roll away. Each light offers up to four hours of illumination in high-power mode (up to eight hours on low), and will boast of a magnetic base that enables you to work hands-free.

With a rubberized design, you can be sure that it will also feature water- and impact- resistance, and will run on half a dozen AAA batteries, which means rechargeables would be the better option in the long run. Definitely something that is worth having around the home, where you can deem this to be a 3-in-1 flashlight purchase.