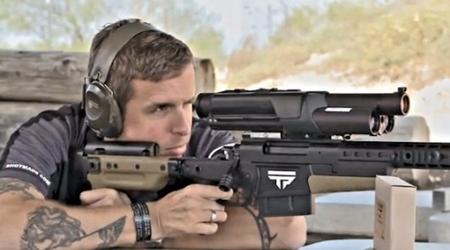 TrackingPoint certainly lives up to their name as a company. Basically, they are a precision guided rifle development company that operates right out of Austin, Texas, and they have come up with a new kind of breakthrough technology which is said to have transferred the wonders of jet fighter lock-and-launch technology onto a combat rifle. That is clearly something amazing to consider, no? We are talking about the average shooter actually being capable of achieving sniper-level accuracy, now how about that?
Jason Schauble, the president of TrackingPoint, has had his fair share of challenges in the past. Not only that, with him being a retired special ops Marine captain who actually picked up not only the Silver Star but Bronze Star medals as well in Iraq, you know for sure that Schaubel is more than qualified to apply his “bold leadership, wise judgment, and complete dedication to duty” in order to elevate TrackingPoint as a company to a whole new level, especially when it comes to the exciting world of advanced tactical weapons.
TrackingPoint touts that their patent pending Intelligent Digital Tracking Scopes (tracking scopes) will enable an unskilled to hit long-range targets in an accurate manner, and this is made possible thanks to the tracking scope’s view being a magnified view of the target along an axis parallel to the rifle barrel. The shooter will first “tag” a target, picking out a desired impact point on the target’s surface. The electronic display will then mark that spot with a red dot, and it will remain fixed on the target even as the direction of the rifle changes.
Should the shooter fire the gun at this point, one would end up with a miss, as bullets never follow a straight path due to the effects of gravity, atmospheric drag, parallax, and cross-winds. The TriggerPoint XS1 prototype will show off the target tag and firing solution alongside windage correction for a far more accurate result. No idea on pricing, but whispers have it that it will cost anywhere from $15,000 to $20,000 a pop.
Company Page