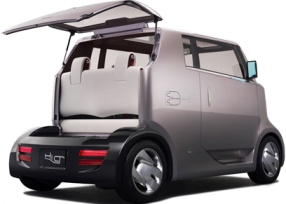 Have you ever seen that Element that some people have been driving? I always thought those rectangular cars were odd, like giant shoeboxes. It appears that Toyota has rolled out an environmentally friendly box-shaped car.

The Toyota Hi-Ct concept car was first shown at the Bangkok International Motor Show, but not at the more famous New York Auto Show. This hybrid vehicle can charge from an external electric source, such as a AC100V accessory socket.

Information is pretty limited other than that, for now. Judging by the picture, it appears there is only room enough for two. So much for room for the whole family. I suppose they could hang out on that back flap of the trunk.

I swear, every time I see one of these concept cars, it feels like it’s driving out of a science fiction movie. This one feels like one of Steven Spielberg’s. The cars in A.I. sort of looked like this, and if you look close in a certain scene from Minority Report, there is a car that really resembles this one.

I suppose the green era that we will hopefully be living in will produce more cars like this. Hopefully, they have a little more curves on them.