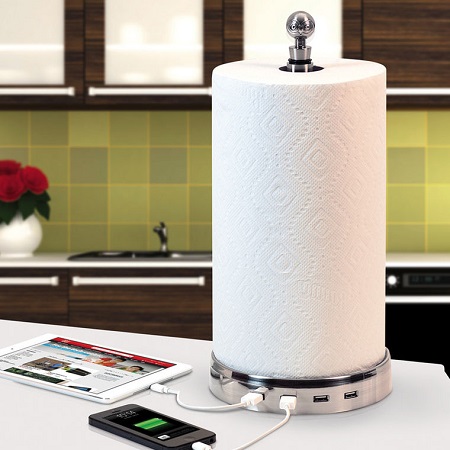 There are items that can do multiple jobs and make our lives easier. The Swiss Army Knife is a prime example, as it has a variety of tools in one place that don’t necessarily correspond with one another, but come in handy. Sometimes a marketing team gets together and makes something that is multifunctional, but in a way that doesn’t make much sense.

One such product is the TowlHub, as it will give you 4 USB ports, a wine stopper, speakers, and a place to put your paper towels in the kitchen. It’s not that these things can’t be together in a single device, more that it doesn’t make sense. You don’t generally want any electronic gadgets around water, and seeing that we use paper towels during cooking, cleaning, and a myriad of other activities that often include H2O in the kitchen, this would not be the safest place for your gear.

If you do like the idea and think you can keep this far enough away from the sink, it would be nice to have an easy-access Bluetooth speaker that would never be moved around. The wine stopper hiding in the top of the towel holder would be nice, but it will look a bit weird once it is in use. If you’d like to have the hub without the speakers it will cost around $50, and with them in place it will be around $80.

Available for purchase on SkyMall, found via Redferret