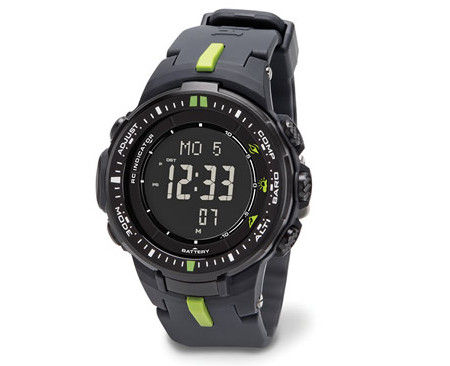 Have you cracked your head to an extent where you are unable to figure out just what to get for your man as his birthday looms on the horizon? Surely another tie or belt is not going to cut the mustard, no matter how large the temptation to do so is. Perhaps he is in need of a timepiece, taking into consideration how he has been rather tardy as of late. If that is the case, you might want to get something which is far more functional than a timepiece that just tells the time – and nothing else. The $299.95 One Touch Trekometer would be a decent candidate as such.

This men’s watch will be able to help you remain abreast of conditions all the time with a single touch of a button even as you adventure outdoors. After all, it is capable of providing a constant flow of reliable data as you hike, ski, cycle, or sail, thanks to its digital display that provides separate compass, altimeter, and barometer sensors. Pressing each function’s button will be able to change the display in order to depict direction, altitude, and air pressure. There is also a thermometer that provide constant temperature readings on the display. In order to ensure precision timekeeping, it receives radio signals half a dozen times per day from radio clocks located in the U.S., U.K., Germany, Japan, and China, while making the necessary adjustments itself for daylight saving and when traveling between time zones.

Not only that, there is also a chronograph (1/100th second accuracy), world time, 24-hour time, and an 87-year calendar, among others. The rechargeable battery will be powered by a solar cell, which means it is capable of running perpetually without missing a beat. In fact, a full charge is said to offer up to five months of use. In addition, it is also water-resistant down to 328′.