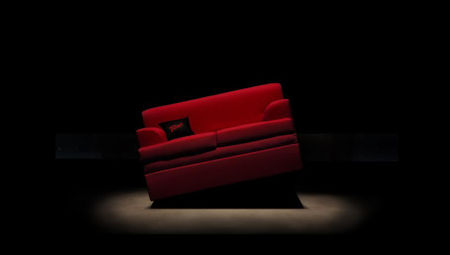 Totino’s Pizza Rolls has teamed up with Twitch, where the latter is the world’s leading social video platform and community for gamers. The reason behind this particular partnership? They intend to end up with what they deem as the ultimate gaming showdown with the use of a one-of-a-kind “Totino’s Bucking Couch.” This coming February 7th, which falls on a Sunday, will see Twitch users have the opportunity to spin, roll and buck some of the top names in gaming right off the couch they’re sitting on in the first ever “Totino’s Bucking Couch Bowl.” It is like riding a rodeo, except that there is no risk of you being trampled upon when you fall off, and neither do you have to worry about ending up in a pile of steaming dung. It is like one of those specialized gaming chairs, but a whole lot more fun!

Developed by Totino’s, the first ever bucking couch has been specially set up like a mechanical bull with a full range of motion and controlled via chatroom commands by Twitch commentators, where it will highlight the Totino’s “Live Free. Couch Hard.” lifestyle. Specially designed to disrupt anyone who takes a seat, the couch also offers a challenge to skilled gamers as well as a thrilling live event for Twitch users to enjoy.

The “Totino’s Bucking Couch Bowl” competition will place two top gamers to face up against one another in two distinct scenarios. One of the gamers will be on the Bucking Couch, while the other gamer would be on a “normal” couch. The Bucking Couch will no doubt offer the massive disadvantage of distractions controlled by Twitch commenters, hence the expert gamers who sit in it will be at the complete mercy of the viewers who are watching and engaging at home, while they ensure their utmost best to remain on it. Opponents who are comfortably seated on the “normal” couch will be subjected to various in-studio disruptors that have been specially geared to distract all of the other senses, which means both sides have its own disadvantages.