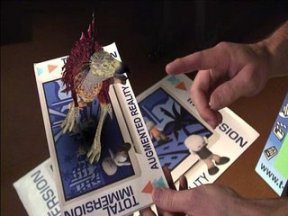 Coolest Gadgets readers, there may not be a reason to post another article on this site. You see, I have discovered the coolest gadget ever. Okay, maybe it is a little too early to say it is the coolest gadget ever, but it is easily the coolest thing that I’ve seen so far at CES 2009. And I saw the Live 3D coverage of the BCS championship, for crying out loud.

Today, while I was at a CES event known as Lunch at Piero’s, I saw a demonstration by a Total Immersion. This company uses Augmented Reality (AR) to make special effects in real-time.

I will try to explain what I saw. Total Immersion’s set up was a camera and a monitor. The representative picked up a box of a K’nex toy and waved it in front of the camera. (If you’re not familiar with K’nex, think of them as something like Lego.)

In the monitor, I saw a 3D computer generated model of what the K’nex toy would look like when it is assembled sitting on the box. When the representative turned the box, the digitally completed K’nex toy also moved appropriately, as if the representative was holding the real toy on a tray.

After a while, the augmented reality image of the toy came alive and flew away. I realize that I didn’t even come close to doing justice in the description of this new Augmented Reality imaging software, so I filmed it.

Sadly, the file failed to download on YouTube. However, I found this one YouTube video to give you an idea what Total Immersion can do. Watch the part with the Pokemon cards battle it out, because I got to see that demonstration too.

Let me know if you agree or disagree with me on Augmented Reality being one of the coolest things that you’ve ever seen.