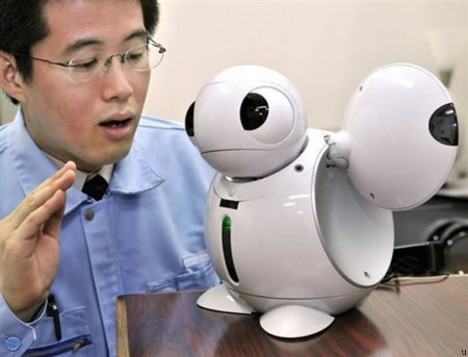 Toshiba has some interesting projects going on with televisions and computers, and this particular one is a robot that looks more like a side project, really.

It is called the ApriPoco, and I’m not sure what the translates to. If you ask me, it sounds like Acapulco, which I’ve heard is a very nice place to go. Okay, I’m clearly getting off-topic.

Anyway, this 8.4 inch tall robot is apparently an interesting universal remote control. In fact, there is a video of it after the jump, and you can see the lady speaking to the robot to make it do things.

That is, I think that this is what is happening. The video is a little sketchy as it is in a language that I do not know, but you can watch the ApriPoco’s beady little eyes (which have cameras on them) as it takes commands from its master. Or, in the video’s case, the mistress. Note how the display behind them switches to a different image on command.

For some reason, the video shows furniture that seems to move on command from its user. Is this Toshiba’s way of showing how they intend to give customers control over their entire place?