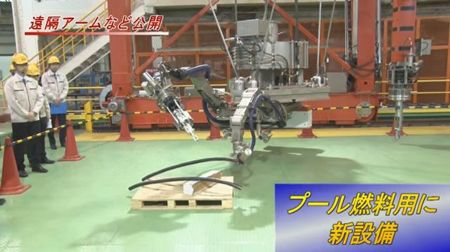 It might be close to half a decadthe e already, but there is still plenty of work to do at the Fukushima nuclear power plant in Japan when it comes to cleaning up radioactive waste. Humans do play a role in performing some bit of that cleanup, as careful as a human can be, but there are also other segments which are deemed to be too dangerous for humans – although robots could play a starring role in this matter. Toshiba has stepped into the mix, where they have come up with a robot to tackle this particular issue.

The radiation within the reactor 3 building at Fukushima is at levels that are not safe for humans to work there on a long term basis, and this is where Toshiba’s robot will come in handy. The amphibious robot is not small in size at all, and it can also perform the job on a remote basis which does seem to make it the perfect candidate in such a situation.

The whole idea of this robot from Toshiba, should it be successful during the trial period, is to install it in reactor 4 at some point in time later this year, and they are looking to remove up to 566 fuel rod assemblies from 2018 onward. Of course, this would mean that the workers will need to master all of the complications that come with the remote control system.

However, mastering the remote control system is far from being an easy task at all, as there are many different nuances to figure out, and then there is also the issue of navigating through the environment in which the robot will be placed within, but for those who feel that this might be some sort of similar “training” that one goes through when playing a video game, perhaps it might be easier and far less boring, especially when you take into consideration just how important the task at hand is.