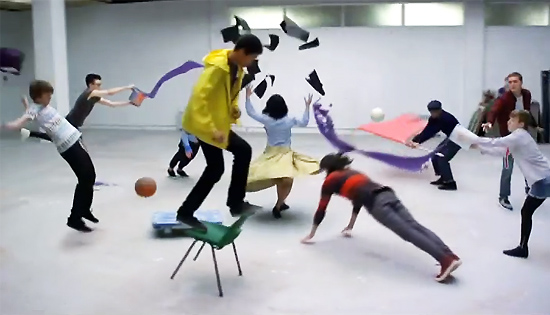 I remember seeing all sorts of examples of “bullet time” a year before The Matrix came out, and then I ended up seeing years of knock-offs. This commercial by Toshiba called “Time Sculpture” is “bullet time” with a machine gun.
Go ahead and watch the video after the jump, and you will see how impressive simple moves are when put together, and viewed in 360 degrees. I hope that you appreciate the work that went into it.
It took 200 cameras on a rig to get this shot, and the circular rig that surrounded the actors had to be taken out with a computer. It took about 110 hours worth of film with 20 terabytes of data, and it has broken the Guinness Book of World Records as the highest number of moving image cameras in a composite shot.
Now all that is needed is to write a film about this shot. Perhaps if Christopher Nolan is working on an Inception 2, he can use a scene like this. Then again, there really shouldn’t be an Inception 2.
You know what would really be cool? If I could view something like this in 3D. I would imagine that you would have to program that from the get-go, or you could do the post-production 3D fixes that are happening a lot in movies these days.
What I don’t want to see is this technique played ad nauseum. By the way, this is a commercial meant to spotlight a Toshiba product.