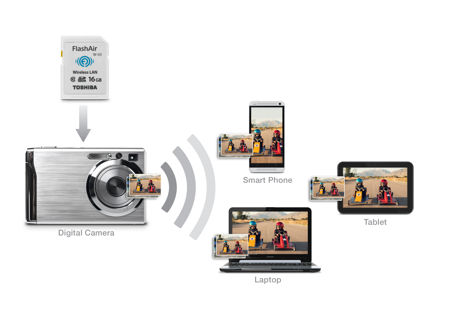 Who would have thought that the humble SD memory card would have evolved beyond that of just storing data – images in particular? Well, we are now truly well into the third generation memory card from Toshiba, known as the Toshiba FlashAir III wireless SD card, and as you can tell by its name, this is one particular SD memory card that doubles up as its very own wireless LAN access point, so that users will be able to share images, videos and files – sans any kind of wires. Now, thanks to its enhanced photo sharing and management features, users are able to quickly designate just which particular photos they want to instantly share, not to mention the files being easily manageable straight from a web browser on a PC.

With the Toshiba FlashAir III wireless SD card, one will be able to experience speedy data transfers in order for users to quickly upload their images and videos. The FlashAir III Wireless SD Card’s Internet pass-through feature opens up the door for users to access the card and Internet (through your separate wireless router, of course) simultaneously, hence enabling the ability to upload images in real-time. Thanks to the integration of a wireless LAN chip, the FlashAir III Wireless SD Card can be made accessible to any wireless capable computers, smartphones or tablets, where it will be able to support simultaneous access from up to seven devices. Not only that, the built-in Wi-Fi access point would also enable transfers without the need for an Internet connection.

Toshiba knows that hardware, without the right kind of software support, is not optimal. Hence, they will be offering a free FlashAir mobile app which makes it a snap to share via iOS and Android-based devices. Each purchase of the Toshiba FlashAir III wireless SD card will be accompanied by a five-year standard limited warranty for that added peace of mind. You can pick it up from March this year onward where it will arrive in 16GB and 32GB capacities, retailing for $79.99 and $99.99, respectively.