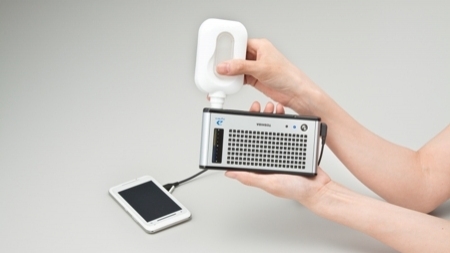 Many of us out there do carry a whole host of gadgets and gizmos with us wherever we go, simply because we cannot live without them. Well, there is always the alternative of going the low-tech way, but once you’ve stepped into the amazing world of technology, chances are pretty high that you won’t want to turn back any more. Unfortunately, many a time we are caught in situations where our devices die on us not due to a software issue but simply because of a lack of battery power. While battery technology has advanced over the years, the newer devices that come out are also packed with even more technology, hence sipping up the same (or even more) amount of juice as before. Fuel cells have long been touted to be the greener and more efficient alternative, but it hasn’t exactly hit the mainstream market just yet, although Toshiba’s Dynario could be a possible game changer. This device could work great in a situation where power isn’t available, for example after a storm, when you get out your emergency radio.

If you love going green, then fuel cells should definitely figure in your plan. After all, they are currently the cleanest and the most efficient generators of energy around, with the Toshiba Dynario making it possible for you to carry one around in your back pack. This portable fuel cell power generator tips the scales at a mere 280 grams, measuring a diminutive 15cm x 2.1cm x 7.45cm while capable of churning out enough juice within 20 seconds to charge up not one – but two cellphones. All power will be stored in integrated lithium ion batteries which can later be transferred via USB to a compatible device of your choice when requried.

Each Dynario comes with a dedicated 50 ml cartridge for refueling purposes, and each cartridge can be used to charge approximately three times before requiring a top up themselves. Fuel cells are currently way more dependable and reliable than portable solar chargers or micro wind turbines, with water being the only emission – definitely not something to worry about since water can always be used for your plants or to wash the floor (assuming enough has been accumulated, of course). At this point in time, the main obstacle would be the Dynario’s cost which costs around $275 for the fuel cell generator and $30 for each 50ml cartridge of methanol.