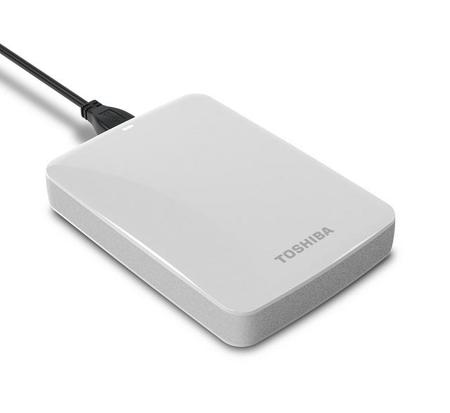 When it comes to portable hard drives, there are some notable names out there in the market such as Western Digital and of course, Toshiba. In fact, the Japanese consumer electronics giant has just announced that they will be rolling out the new Toshiba Canvio Connect portable hard drive which will be the first of its kind to let you access and share files straight from the device, with a maximum capacity of 2TB to boot. I know that there will be some who say that Western Digital, too, has had a 2TB portable hard drive out for ages, but can it do what the Toshiba Canvio Connect does?

In a nutshell, the Toshiba Canvio Connect would allow you to access, share and perform a digital back up of all your files regardless of where you are, and you can use a bevy of devices to boot such as a desktop, notebook, tablet or a smartphone. All of this is made possible thanks to its remote access and file sharing capabilities, where one is able to share one’s digital content with friends, family and colleagues from anywhere at any time directly from their Canvio Connect.

Despite its capability of carrying around 2TB of storage space, you would be pleased to know that the Toshiba Canvio Connect will still arrive in a new slim and compact form factor, where you can choose from a range of different colors, where among them include the all time classic black to the likes of silver, blue, red and white. BlackBerry users will have to sit this one out however, as the Toshiba Canvio Connect will feature its very own Toshiba Storage iOS or Android app that lets you perform a remote back up and access capability to the external hard drive.

Just make sure that your Toshiba Canvio Connect remains connected to an Internet-enabled computer which is running, and you can access your files, photos, music and movies anytime, anywhere, regardless of where you are. You are also able to share large files and folders instantly, and as an additional bonus, the Canvio Connect will come with 10GB of free cloud storage for storing “always available” copies of important files. Expect to pay $99, $109.99, $129.99, $169.99 and $189.99 for the 500GB, 750GB, 1TB, 1.5TB and 2TB models, respectively.