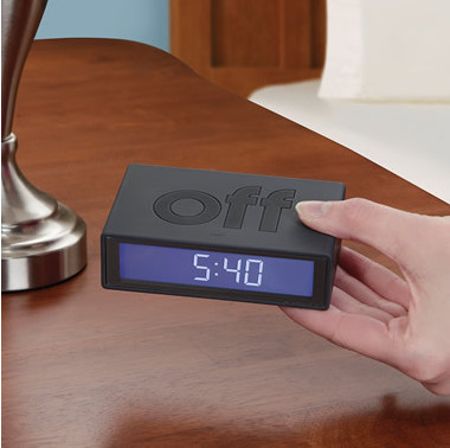 Not all alarm clocks are created equal, this is for sure. Well, you can always settle for the regular, old school din that the metal hammer of the alarm clock emits each time it strikes the bell, and turning that off is as simple as flipping a switch behind. How about some of the more modern digital ones, where you slam a relatively large button (as opposed to the rest that dot the alarm clock itself) in order to silence it or send it to snooze mode? Here is a different take with the $44.95 Topsy Turvy Alarm Clock.

The Topsy Turvy Alarm Clock happens to be a timepiece which would see its numbers reorient as well as alarm shut off whenever it is flipped over, in the same manner as that of grilling a burger patty, I suppose. Definitely far more civilized, thanks to its rather innovative product design, allowing this timepiece to do away with the kind of groggy fumbling associated with those who have been rudely awakened from their forty winks. When the side marked “on” is up, the alarm is set and its time is shown in the corner of the display, and in order to keep the alarm quiet, all that you need to do is to flip the clock over in order for the “off” side to face up. There will also be numbers in the digital display that perform a 180° turn so that it will appear the right side up. It runs on AAA batteries, and tapping the clock briefly illuminates the screen while giving you another eight minutes of snooze time.