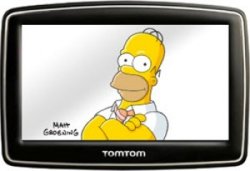 Some of you might remember the Knight Rider GPS from Mio, but most drivers aren’t all men of action like David Hasselhoff. Some of us are the average working class guy like Homer Simpson.

Perhaps this is why TomTom invented the voiceskin of Homer Simpson for their GPS. Instead of a robotic, ersatz voice box telling you where to go, why not the most beloved cartoon dad of the last 20 years?

Homer says things like “whoo-hoo, you have reached your destination” and “at the end of the road, turn left, then take the motorway, hee-hee-hee”. I imagine that the studio had Dan Castellaneta in a recording studio for a day to make these vocal recordings. I hope he was sufficiently compensated, because I once heard that the Simpsons cast make about one million per episode.

Let’s hope that Homer’s directions are clear enough not to get you lost, or that kind of defeats the purpose of having a GPS. I’m wondering how long it will take before hearing Homer’s voice becomes annoying. Personally, I would prefer Marge’s voice, as it would be nice and soothing. I would imagine that Bart would deliberately get me lost.

Well, if you want to try this out, it only costs about $13, and is available at the TomTom site.