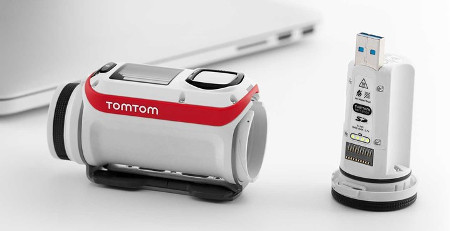 The action camera market does seem to get a little bit more crowded now, considering how existing players continue to improve and up the ante from time to time. Contour has their fair share of action cameras from the ROAM series, while GoPro has certainly established themselves with the Hero name. As for TomTom, a name that we would think be associated with GPS navigation devices in the early years, has just revealed that their TomTom Bandit action camera is available for purchase.

Just what does the new TomTom Bandit action camera pack underneath the hood? It happens to be the first ever 4K HD action camera in the market that comes with a built-in media server. Apart from that, it is so easy to use, that the TomTom Bandit boasts of a revolutionary shake-to-edit feature which would make editing and sharing easier than ever before, letting you share videos with your friends within moments of the action – making sure that they will always have an idea on what you’re doing or going through.

Not only that, the Bandit action camera will also come with a no fuss batt-stick USB, doing away with the need for pesky wires that tend to be bulky. The asking price of $399 a pop surely makes the TomTom Bandit action camera an interesting consideration if you are in the market for such a device, as it hopes to bring about a change in the way people record, edit and share their most exciting videos.

In-camera motion and GPS sensors will work in tandem in order to automatically find and tag exciting moments based on speed, altitude, G-force, acceleration and heart rate. You can also tag highlights manually with a tagging button on the camera or via the remote control.

Other hardware features of the TomTom Bandit include a wide angle lens, a high-end 16 MP CCD sensor and a powerful processor. It is also totally waterproof, and there is a steel ring mounting system that lets you place it on a compatible helmet securely, while a microSD memory card slot and SuperSpeed USB 3.0 rounds it off.