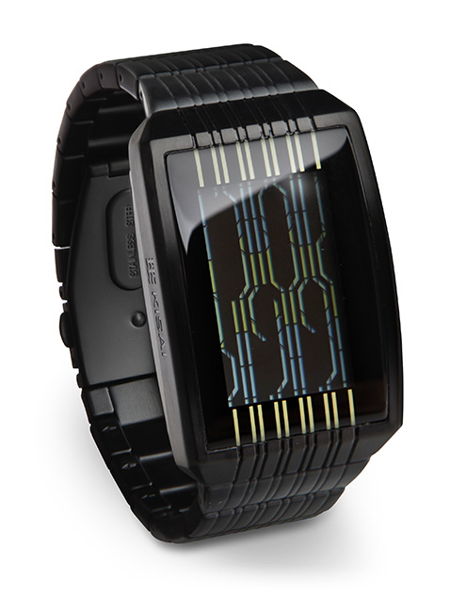 I am quite sure that many people have already watched The Matrix which rolled out at the end of the previous century, having turned into a cult film with a sequel and subsequently, third film which had plenty of snazzy special effects, although the explanation in the story has proved to be as confounding as ever even until today. I guess it makes sense then, if the $168.99 TokyoFlash Kisai Online timepiece was part of the Matrix world, especially since it comes with an extremely unconventional way of telling the time, that to the untrained eye, it is seeing nothing more than just some random lines moving around.

With the TokyoFlash Kisai Online, it will come with a built-in accelerometer, so that it knows the exact moment when you turn your wrist. Doing so would see the lines fall away, allowing you to tell the time as it is right there and then. How is that for a genius product? The TokyoFlash Kisai Online comes with a black steel case and strap with natural LCD face, and it will take some practice before you are able to tell the time expertly, so do expect a learning curve attached to this cool clock. One thing’s for sure, once you have mastered reading the time on it, your friends would have regretted taking the blue pill in the past.