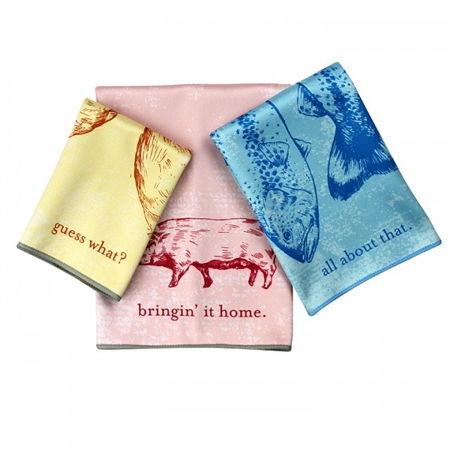 Spending some time in the kitchen is not unique to most people, and in fact, some of us do like to whip up some delicious creations along the way. The thing is, one cannot have a perpetually clean stable if one does not want to own an ox to plow the land. In other words, you cannot come up with something that is delicious for the whole family without getting the kitchen a little bit messed up – or a whole lot, depending on what you have just whipped up. Cleaning a greasy kitchen is not the most interesting of chores out there, but someone still has got to get the job done, right? Toddy Gear might have just the thing for you, with their latest release, the Microfiber Toddy Towel.

The Microfiber Toddy Towel is a dual-sided, dual-function, 100% microfiber towel set, where it boasts of high-quality plush microfiber on one side that is meant for cleaning purposes, while there is a silky microfiber on the other side to cater for those polishing moments. Toddy Towels are able to tackle dirt and grime on kitchen surfaces, appliances and even windows, and at the same time, it does so while adding a touch of style to the kitchen.

Those who are interested in keeping their kitchen spick and span can always settle for the Toddy Towels which will arrive in five unique sets of three, which include a small (9”x12.5”), medium (11”x15.7”) and large (14.4”x19.9”). Each towel in the set will boast of a unique design, including “Clean Slate,” “Home Slice,” “Farm Fresh,” “Kitsch’n” and “Icebox.” Another interesting point in picking up the Toddy Towel would be the fact that this is the only towel that provides a protective coating which will be able to trap dirt and at the same time, prevent the buildup of mold, mildew and odors. In this day and age where many things are manufactured in a mass manner in some factory elsewhere, the Microfiber Toddy Towel is proudly handmade in the USA, where each set will retail for $24.99. Hence, I would expect that not all of these towels will look the same, and surely you can leave room for discrepancies here and there.