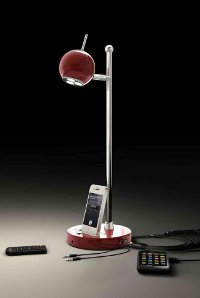 iPod/iPhone docks are dime a dozen for the longest time ever since Steve Job’s idea took off in an explosive way, and most of the time, they come in the form of a built-in alarm clock, some with bigger speakers than the rest. Well, what M&C Lighting has in store is something totally different – taking the road less traveled, so to speak, by coming in the form of a lamp. Yes sir, not only can you dock your portable media player cum phone from Apple in here to juice it up and play your favorite tunes, you will also be able to use the artistically named t’Light S to provide enough light while you read the latest book on poets.
Having a heart for the environment, the t’Light S will boast eco-friendly illumination from a 5W LED in addition to audio output and a charging function. Why LED, you ask? For starters, it not only has a superior life, but will also consume far less juice compared to other light sources without having any detrimental impact on light quality. The t’Light S is not only suitable for reading, but will also do its part to protect your eyesight as well. It seems that M&C Lighting recommends this as a night light if you need some sort of light while sleeping, where the included remote control will enable you to dim the LED light accordingly via a range of settings.

The couple of built-in stereo loudspeakers are said to deliver superior sound when you dock your iPod or iPhone. TDMA technology does away with any interference emitted by your iPhone. The remote control will also control not only the LED light, but it can also play, pause, turn to previous/next and adjust the volume accordingly. If you want, the t’Light S will double up as your stereo loudspeaker, although chances are it will work far better as a nightlight than to raise temperatures by playing back “Party Rock Anthem”.
Press Release