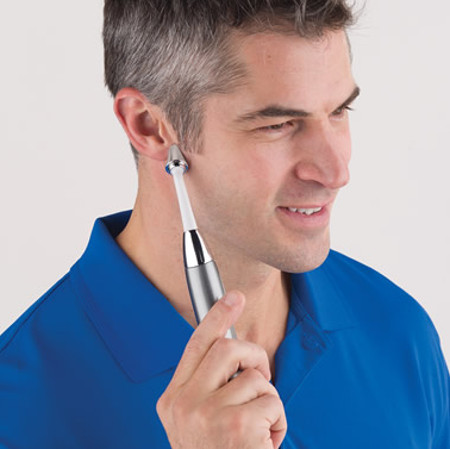 Let’s face it – the moment that Potter-mania took over wherever you lived, you surely had wished at least once in a particular situation to be able to whip out a magic wand and perform some wonders. Perhaps to get rid of that pesky colleague of yours, or maybe wave the wand in order to remove all unwanted traffic in front of you so that you need not be late to clock in at the office yet again. For folks who are suffering from tinnitus, you know that you would like to find some relief, and perhaps you have tried the likes of the Tinnitus Masking Sound Generator, but want something more than that. Enter the $89.95 Tinnitus Relief Wand.

The Tinnitus Relief Wand can be described to be a vibrating wand that quiets the ringing, rushing, or buzzing sounds of tinnitus for up to 18 hours, now how about that for a long period of relief? It can be applied to four points on the outer ear as well as surrounding bones, where the wand’s gentle vibration will stimulate the auditory nerve at the same time producing a low hum similar to white noise. The American Tinnitus Association recommends this sound therapy so that it can muffle the clatter of tinnitus and train the brain to ignore it. The wand tip will tuck comfortably into the opening of the ear canal, and the slim device is portable for relief whenever symptoms occur. It boasts of a cordless rechargeable battery that delivers up to three hours of relief from a full charge from its included adapter.