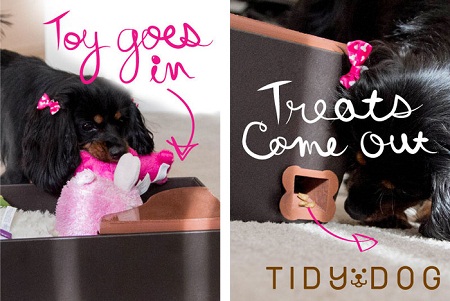 Having a dog is like living with a perpetual child. They’re always full of energy, trying to find new ways to get in trouble, and leave messes behind where they’ve played. If you’re working with your pooch to improve their behavior, there’s a good chance you’re going to have to go through a few treats to do it.

The Tidy Dog Toy Box will let you teach your pup that putting their toys away after they play is a good thing. This box has a delicate motion sensor that will know when your dog is putting things away, and pops out a few snacks for a job well done. Even if your pup is a bit sneaky, this box was designed to handle some of their tricks. The first prototype was based off of a motion sensor candy dispenser next to a toy box, and has developed into more of a precise machine.

Your pooch won’t be able to trick this into handing out more treats very easily, as it has load cells that can detect even the slightest of vibrations which have to sense absolutely no movement for 30 seconds before it will pass out a treat. That means sitting in the box (as it can even detect breathing) or putting several toys in one after another won’t do anything. If you’re interested in this training method, then this toy box will cost you around $69-99. There is an on/off switch, so you can also train them to learn when play time or cleanup  begins and ends.