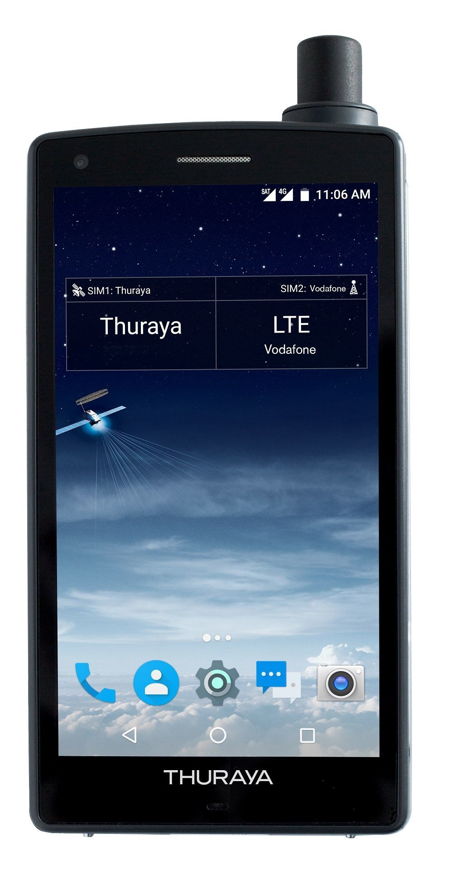 When it comes to mobile devices, we have certainly come a long way in our love affair with gadgets that allow us to communicate in better and more efficient ways than before. The smartphone is one of them, now coming with dual cameras and being the all-round portable entertainment system for most folks. However, has there ever been an Android-powered satellite smartphone? Not quite until today, as Thuraya Telecommunications Company revealed the first device of its kind in the world in the form of the Thuraya X5-Touch. This bad boy will be powered by the Android operating system, although it has not been revealed just which particular version of Android it runs on.

Sporting a 5.2-inch Full HD display accompanied by Gorilla Glass in order to ensure that the Thuraya X5-Touch will be able to go with you virtually anywhere in the world without having to worry about its durability, this is the handset that targets users who frequently move in and out of terrestrial coverage across a range of market sectors, ranging from government missions to energy projects, enterprise communications, and NGO deployments. It not only offers fast connectivity, but it does so with ease while you are on the move, even when you are thrown into the most remote of areas that are normally beyond the reach of smartphones.

Sporting dual-mode and dual SIM capability, the pair of SIM card slots offer full user flexibility, while the dual-active mode allows it to have both its satellite and GSM (2G, 3G, or 4G) modes ‘always on’ at the same time. It is also IP67 rated for full dust and water protection, while complying with the MIL standard. There is a high-capacity battery (the exact capacity has not yet been revealed at press time) to deliver extended talk time and standby time, while a built-in SOS button would certainly come in handy. Of course, Thuraya has not forgotten about throwing in a front and rear camera to keep up with the norm for smartphones these days.

No idea on how much this bad boy will cost, but it is certainly a worthy alternative if you want a handset that allows you to be reached anywhere, anytime of the day.