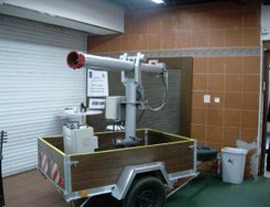 Do you know what you are looking at? It looks like a firehose, doesn’t it? You know how firehoses can disperse crowds? This device, known as the Thunder Generator, can also disperse crowds, and can do a better job.

The Thunder Generator uses ordinary sound with liquid petroleum, cooking gas, and air to create explosions that can create such a shockwave, that they can literally blow people away.

The designer, ArmyTec, hopes that this device can be mounted anywhere, and then combined with other Thunder Generator barrels to create a sort of shield around something.

Believe it or not, this device was once used by Israeli farmers to scare birds away. Right now, this amped-up version of the Thunder Generator is starting to scare me away.

Yeah, I’m not looking forward to a future where these devices are used to keep crowds at bay. I suppose it would be better than Soylent Green. Still, if you see this thing coming to a mob, then you had better get as much space between you and it as possible.