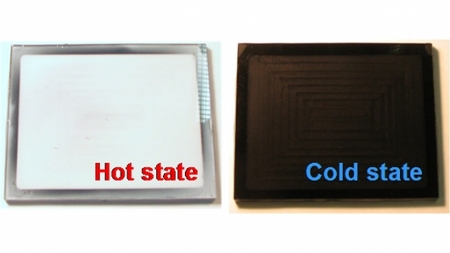 Basically everyone from presidents to prime ministers and the working man on the street are concerned about the environment these days, and it comes across as no surprise. After all, you can’t just pack everyone off into space once the earth becomes inhospitable, can you? With concern for dwindling green lungs, exotic wildlife that supports our fragile ecosystem and melting polar ice caps, it comes across as no surprise that more and more folks are putting in the effort to make sure there is still a green earth to be handed down to our kids in the future. A team of Massachusetts Institute of Technology (MIT) graduates have certainly weighed in with their part, where their Thermelon contribution picked up the third annual MIT MADMEC (Making and Designing Materials Engineering Contest) – by virtue of being a thermally-activated, color-changing, roofing material.

The Thermeleon (a wordplay on chameleon) relies on phase-change polymer gel-filled tiles, enabling the entire team to control the light energy transmission properties of the roofing material by virtue of changing its colors. This translates to a hot day seeing the roofing material turn white in order to reflect heat so that you and your household won’t burn up inside, while the cold winter chill will turn the material transparent in order to absorb heat better that will go some way in helping reduce your reliance on a heater at home.

According to the team, most of its testing has been conducted on a gel which will transition at around room temperature, allowing one to choose from a wide variety of transition temperatures that range from approximately 0-100°C (32-212°F) and beyond. According to the team, “When the polymer phase separates from the gel, the solution becomes a mixture of polymer and solvent and because the polymer and solvent have different refractive indices the mixture becomes strongly scattering (white colored). When the mixture cools below the transition temperature, the polymer re-dissolves in the liquid and the solution is clear (exposing the black backing) and colorless.” Hopefully when this technology reaches main street, it will be affordable enough for everyone.