Sigbritt Löthberg, a 75-year old woman from Karlstad in central Sweden has made IT history. Her home is now connected to the Internet by a 40 Gbit/second pipe. Yes, this is 5 GB/second. So, in theory, a DVD would take less than a second to download. Or, put another way, it could hold 1500 simultaneous full HD streams.

The woman is the mother of Peter Löthberg. Peter is a famous network technician, and works for Cisco. He collaborated with Karlstad Stadsnät (The arm of the local administration who’s concerned with the city’s networking) to get this gig going. 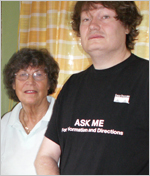 Peter Löthberg and his mother

If you’re wondering if this is practical, or just want to know WHY this has been done, read on.

Sigbritt Löthberg did not even have a computer until recently. Her son, together with Cisco and the Stadsnät wanted to demonstrate a new technology, and show people that they can all get extreme speed for relatively low costs.

The data is transfered exclusively via optic fiber wires. A new modulation technology allows transferring data at these blazing speeds without any repeaters for thousands of kilometers. Peter states that the maximum distance is virtually unlimited.

Of course, there’s yet no practical need for such speeds. No hard drive or SSD can write or even read at such speeds. Their regular data throughputs are mere fractions of what the connection can do.

As stated by Peter, the hardest part of setting up the connection was installing Windows on his mother’s new computer.