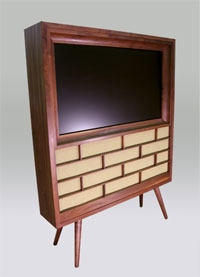 If your flat panel TV is looking entirely too modern in your home, this prototype design might spark your interest. The M21 Flat Panel definitely looks more like one of the earlier TVs than the sleek ones offered today. Although I love how the flat panels look, someone that has a home that is overly retro might not want to slap something so modern into their living room. Something like this would blend in a lot better. Besides that, if you’re robbed by really ignorant criminals, maybe they’ll be fooled and leave it alone thinking it’s just an old outdated TV.

The design was made by Joe Wilkerson, but anyone that is great with their hands could probably easily make something similar. It’d probably be faster than waiting on the prototype to hit the market. Especially since prototypes don’t always get made. This particular design features a 42” plasma screen and is designed after TVs from the 1950s. The designer is still testing the waters and seeing what kind of public interest his design draws before he takes any further steps with it. At some point he hopes to make a wider and shorter version that features a bit of storage. Which means for all those interested in the design keep a lookout on his page for any new pictures he may post.