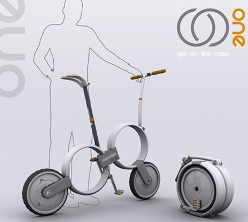 I have recently discovered the One, and it is not Neo. Not unless Keanu Reeves is a bike that can fold up into a compact round case.

The One is very similar to the Backpack Bike reported on a while ago. This one has the convenience of being compact, but doesn’t mount on the back. Instead, it has an odd handle that looks to be made from what becomes the handlebars in bike mode.

I am not certain how this bicycle can possibly fold up into this compact form. It looks like that wheels do some folding job into twin circular frames, and then those two frames fold up like a suitcase.

I’m also not certain how the pedals can spin the wheel behind it (or in front of it, for that matter) without a chain. It looks like the pedals are attached to a roller of some type and spin the wheel on toothless gears.

Also, what happens to the seat? It doesn’t look near as compact as the handlebars. Perhaps it detaches from the apparatus entirely.

The urban bike is designed by English designer Thomas Jowen, but is still a concept. There is no word on when it will hit the market, or what price it shall be.