The good folks at Google Earth (you have downloaded it, haven’t you) have some serious 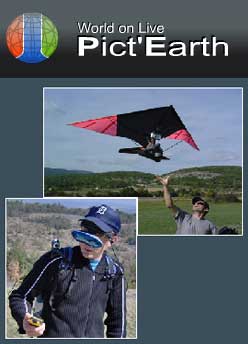 fans by the name of Pict`Earth.

They’ve got a great little bit of gear and software. They provide the coolest service for viewing high resolution overhead images.

A small RC airplane flies at low level and records high resolution video. The video is then placed into Google Earth and is actively used to display nap of the earth images.

One of the key uses they’re touting it for is to record events from overhead. Just think of all the great things you could soon see on Google Earth: the overhead of the crowd from a football game, the throngs of a marathon crossing a well known bridge, bulls running down drunken runners in Pamplona, the possibilities are endless!

The folks at the Google Earth blog found this originally, (more likely it was sent to them).

I sincerely do hope either Google develops, purchases, or assists the folks at Pict’Earth to develop a consumer level system for just such a use. It just looks like too much fun!!!