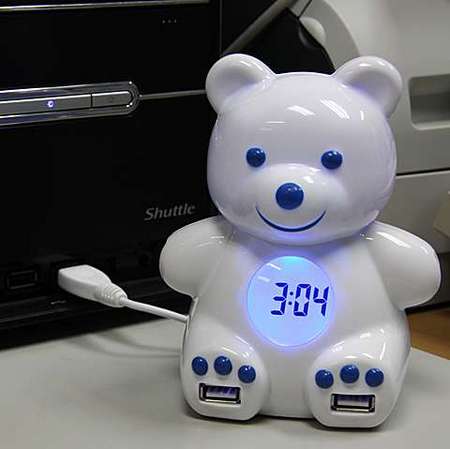 This would be a great hub to travel with, that is if you’re into teddy bears.  I will probably never understand the trend with cuddly stuffed and teddy bear shaped hubs and USB drives.  It’s almost like they’re marketed at kids, but then not really.  Not many kids are old enough to need a hub, but are still willing to admit they love teddy bears, at least from what I can tell.  Well this hub not only gives you extra ports for your USB gadgetry, but it has a built-in alarm clock too.

With this, while you’re out and about you can be sure that you’ll have an alarm clock that you really trust as well as a hub.  The clock itself is powered by a AAA battery, so it doesn’t actually have to be plugged into your computer to keep running.  It has a grand total of four USB ports, one in each foot and then one in each arm.  They come in three colors, pink, blue and white.  You can pick it up through Gadget4all for $14.50 a piece.