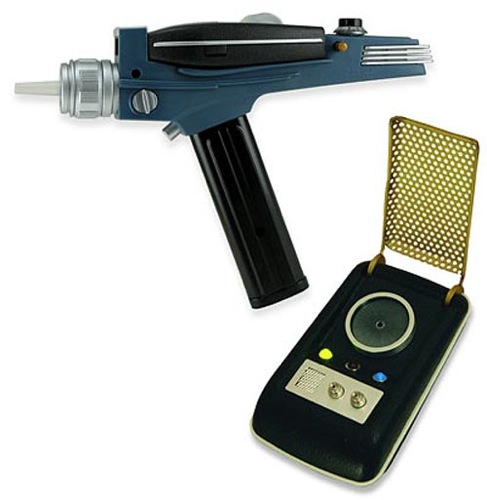 If you have a Star Trek fan you’re shopping for this Christmas, Think Geek has you covered.  They are now selling a Star Trek Phaser and Communicator Set.  Which would be especially great for the fans that enjoy dressing up as their favorite characters.  Just try not to act out the roles in front of any potential partners that are not Star Trek fans.  You might be a little more safe if they’re at least Star Wars fans, but you’re still going to be pushing it.

The phaser has four power settings, with each one there are progressively aggressive sounds as well as lights.  It also includes a sight that you can flip up and has a switch to turn off the lights.  The communicator pulls sounds straight from the TV show, which include not only sound effects but famous phrases as well.  You can pick up them both on Think Geek for $39.99.  Shockingly though for once the batteries are actually included.