First of all, there’s the modern culture: a ‘fashion’ MP3 player, to be worn as a pendant.
Then, there’s the religious side: sombre colors and stiff cross form.
But then, after finding out that it fits an AAA battery inside, I reckoned that it’s about the size of pimpin’ jewelry. The colors aren’t right for that, though.. no gold?

This is not the first cross-shaped MP3-player we’ve stumbled upon. The other one actually had some pretty slick looks. It doesn’t seem to have made it past the concept stage, though.

Read on for the hard specs and the usual engrish-related fun. Of course, there’s a bigger picture inside, too.

I’ll cut it short: here are the official specs, commented by me:

Judging from the picture, it also has an integrated loudspeaker, for those cool gospel hits that you just have to share with the others.

Here’s a bigger image, for a better look: 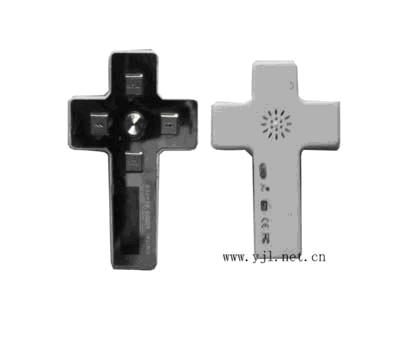 Unfortunately, the producer only sells industrial amounts of the players. If someone would really like to start up a business with these, here’s the product page. Be sure to check the other super cool products, too. You’ll definitely have some fun!