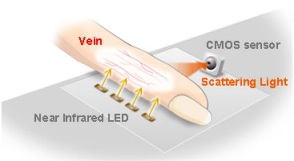 We all know that no two fingerprints are exactly alike, which is how biometric scanners can identify the correct user. However, did you know that people can be positively identified by their finger veins?

This is exactly what the mofiria is designed to indentify. It uses near infrared LEDs on the side of the user’s finger, and then CMOS sensors can capture the scattered light inside the finger veins.

Apparently, scanning the finger veins is a more accurate way of determining a person’s ID. They also can’t do that trick of using false fingerprints, or that one myth of fogging up biometric scanner with your breath. (This myth was thoroughly debunked by commentators on a previous entry about Samsung’s new fingerprint-scanning LCD panels, by the way.)

Since these finger-vein scanners are flat like biometric scanners, they will be easy to integrate in devices like cellular phones and laptops. According to a recent Press Release, Sony hopes to have this new technology on devices “sometime within the 2009 fiscal year”.

I suppose the real question is the price of installing these devices, which the Press Release does not estimate. It also does not mention why it is called “mofiria”. Is that short for “Mo’ Fire Ya” or something? As in, it fires LEDs through your finger? Who comes up with these names?