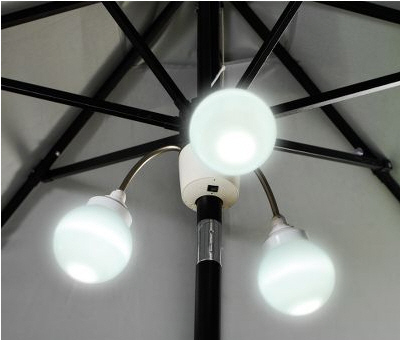 If you’re on the lookout for a bit of outdoor lighting for your deck, this solar umbrella would be a nice way to illuminate a bit of outdoor dining after dark.  The only issue is that with those bright and shiny lights hanging underneath the umbrella you’re going to end up attracting every bug around.  Citronella candles can only do so much when they are fighting against 3 orb-like bug magnets.  I would say that it’d be alright if you were in a screened in porch, but an umbrella kind of indicates that you’re outside.  Otherwise, you wouldn’t really need one.

Sadly that isn’t the only snag with this umbrella, the other issue is the complete lack of images by the site that is selling the product.  They show the small picture shown here, but don’t bother to show the full umbrella.  Granted it is just an attachment for your umbrella, but it includes a solar panel to attach to the top of your current umbrella.  Which would be kind of nice to see before you go purchasing it.  The little attachment is being sold for $89.95.  A small price to pay to see all the pretty bugs swarming over your head, then again there is the possibility that it doesn’t by some miracle draw bugs.  However, don’t get your hopes too high since the site doesn’t mention a change in wattage to reduce the amount of bugs being drawn in.