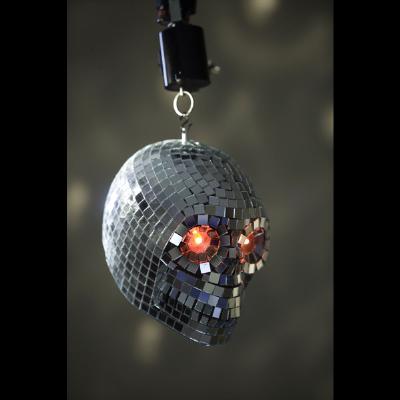 Disco balls have got to be the ultimate shiny object and this one even has glowing red eyes.  It also even comes in the shape of a spooky skull.  It’d be great to pick up for either this year’s Halloween party or just anytime you’re in the mood for a goth themed dance.  After all the goth kids can’t have just any normal disco ball, it has to be slightly different so as to not get confused as one of the other average joe dances.  The mosaic glass may look the same as it does with every other disco ball, but thanks to glowing eyes and an odd shape it sets itself apart from the rest.

The skull itself is 8 inches, so it’s not very big.  It’s more meant for smaller dances within your home than those the size of prom.  It requires an odd mixture of batteries to keep it spinning all night.  It uses one D battery and three AA.  That’s and, not or, and of course they’re not included.  However, it does include a motor that spins the ball on the string for you.  It will cost you $39.99 from the Fright Catalog.